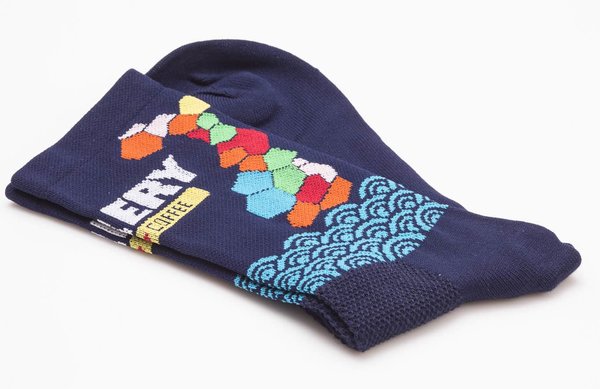 The original DeFeet sock, the Aireator, has been consistently upgraded and remains the gold standard of cycling socks. Affordable and incredibly durable, Aireator’s are the most popular cycling sock the world has ever known. Available in many different cuff heights and either single or double layer cuff, the foot of the sock is the same on all of them. The name Aireator comes from the Aireator mesh weave foot top. The first sock to incorporate this type of open-mesh construction, Aireator’s breathe and wick well. They are thin throughout for a lightweight feel and help maintain an efficient, close fit in performance cycling shoes. Made with Sorbtek Repreve fibers that are derived from recycled resources.

At the age of four, Shane Cooper arrived in the United States from England. His father distributed knitting machines. In the late 1960’s, there was a lot of knitting happening in the Eastern United States. Shane grew up around knitting machines, but he was always more interested in bicycles and music. It wasn’t until the early 1990’s that Shane decided to turn his attention entirely toward knitting. He embarked on an entirely new way to knit socks. He found it, and he was able to create sock designs the world had never seen.

DeFeet was born in 1992. The first product was a totally customizable, open mesh weave airflow sock. The world’s top endurance athletes took notice immediately. The characteristics of those early designs are evident throughout the DeFeet line, today. Elegant, simple, useful and built to last.

There is less knitting, less manufacturing altogether, in the USA now than when Shane’s father emigrated. DeFeet will not be joining the outsourcing movement that has become altogether too easy for companies in the United States. To us, that move is like paying someone else to play your music for you. DeFeet is the band, and we will play our own music, thank you. No one else can make our stuff better than we can. Harvard MBA’s have told us it’s not smart to build a business the way we have. They tell us we can profit more without getting our hands dirty with manufacturing. They say we should source cheap product and mark it up dramatically. That’s ok. They can join the long list of brands that do it their way. To us, that would be a hollow existence.